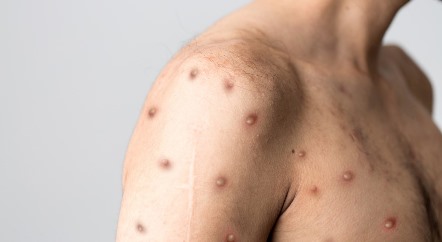 The latest report on the transmission of monkeypox confirms that it is spread overwhelmingly by men who have sex with men. What should we conclude from this?

In the early days of AIDS, it was commonplace to hear preachers refer to this “homosexual disease” as a judgment from God.

As recounted by Michael Christensen on the Ministry Matters website, “When I was a pastor in San Francisco, many Christians viewed AIDS as a sign of the end of the world. I kept busy countering the predominant apocalyptic view in evangelical and fundamentalist churches that ‘AIDS was God’s judgment on the homosexual lifestyle’ or as ‘punishment for IV drug use.’ I remember trying to help people process (including those in my own congregation) why it was that those whose behavior put them at high risk got AIDS from a virus, not as a punishment from God for immorality.”

At that moment, though, AIDS being a judgment on homosexual men seemed like a perfectly logical conclusion, especially given the climate of the day, when homosexuality was denigrated rather than celebrated by our nation.

Sadly, as pointed out by ex-gay leader Joe Dallas, the church missed a great moment to reach out to gay men across the country at a time when they were terribly fearful of this mysterious and dreadful disease. It was decimating their communities. It was destroying their bodies. It was killing young men in their prime.

Yet the main message these men heard from the church was that God was judging them for their sins.

To repeat: at that moment, it seemed clear that this was the case, that the Lord was striking these transgressors with a modern-day plague. All too few Christian leaders seized the opportunity to reach out to the homosexual community, even if they felt that AIDS was a divine judgment. This should have been the time to visit the sick and dying and offer them mercy and repentance through the cross before it was too late.

Today, we are witnessing another “gay disease,” although one that, at present, is not a fraction as savage and deadly as was AIDS.

What are we to make of it?

First, when we live by our Creator’s rules and honor the proper functions of our body, on average, we will be healthier and live longer.

That’s why insurance companies ask if we smoke or drink.

That’s why people who were obese had a higher chance of dying of COVID, not to mention dying of a host of other conditions, including heart disease.

And that’s why men who have sex with men have a much higher rate of contracting STDs than the rest of the population. Some of their most common sexual acts violate God’s intended use of the body. It is only natural that more diseases are contracted and transmitted.

In fact, simply going outside the bounds of marriage opens people up to more STDs, even somewhat mysteriously.

What I mean is that if a man and woman got married as virgins and had a healthy sex life for years as husband and wife, they would never contract an STD. But if they committed the exact same act with someone they were not married to, they might well contract one.

Why? And how? Where did this STD come from? (The answers to those questions, which are somewhat speculative, are outside the scope of this article. But they are questions worth asking.)

When we follow the Creator’s instruction manual, we have a much better chance of survival.

This is a good time for all of us to ask ourselves, “Am I living in harmony with my Maker’s guidelines in every area of my life?”

Judging others is easy. How about judging ourselves?

Second, we need to remember that all of us live by God’s mercy, and the moment we become righteous in our own eyes, thinking we deserve His favor, we deceive ourselves. That’s why self-righteousness is one of the ugliest sins in God’s sight.

Jesus gave a famous parable to this effect, known as the Parable of the Pharisee and the Publican (or, Tax Collector).

To put it in contemporary terms, a well-dressed, rich, Christian man was walking into his church building on a Sunday morning when he noticed a homeless man lying on the street, barely conscious and mumbling under his breath.

The Christian said to himself, “God, I thank you that I am not like this wretch. I have not made a mess of my life. I have not had a drink in more than 30 years. I go to church faithfully. And I give away more money to the poor every year than this bum has made in his lifetime.”

As for the homeless man, he was actually mumbling a prayer, saying, “God, I’m not worthy of Your mercy. I’ve destroyed everything through my foolish choices. But a preacher told me yesterday that Jesus could save even me. So, Lord, because of Jesus, have mercy on me!”

According to Jesus Himself, it was the homeless man who was justified in God’s sight that day, not the wealthy Christian man.

Michael L. Brown is the founder and president of AskDrBrowMinistriesn and of FIRE School of Ministry, and host of the daily, nationally, syndicated talk radio show, The Line of Fire.   He also hosts TV shows on GOD TV, METV (in Israel and the Middle East), and NRBTV.  He became a believer in Jesus in 1971 as a sixteen-year-old, heroin-shooting, LSD-using, Jewish, rock drummer. Since then, he has preached throughout America and around the world, bringing a message of repentance, revival, reformation, and cultural revolution.   Ask Dr. Brown Dr. Michael Brown archive articles.

The Quality of Mercy of the American soldiers

Some Call it The Highway to Hell

Our Country, Apart from God